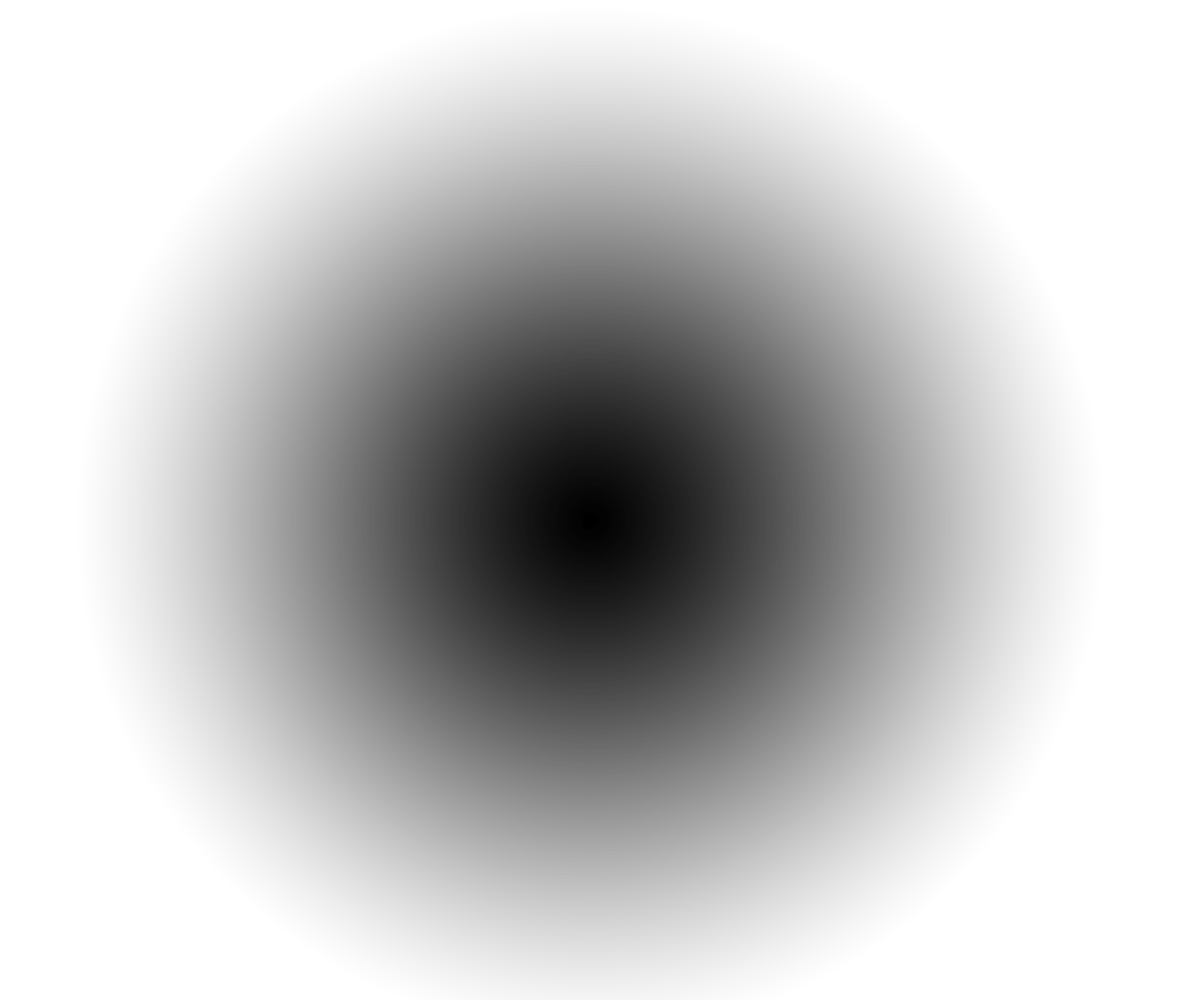 Exhibition "Digital Dreams"
In the frame of the Cultural program of the III Moscow International Forum for Innovative Development "Open Innovations"
October 14—16, 2014

To connect is to dream, perpetual new ways of interaction arise in the dawn of the digital revolution. We are just starting to discover a hybrid world at the intersection of the material and the immaterial information space. Forecasting the future turns out to be hard but discoveries do not simply appear we design and construct them. Artists, like innovators are explorers, to create is to invent and make meaningful connections that express our identity in a new image of the world.

Art provokes a debate about our future world and generates new points of view to understand our present reality. Artists create blueprints for progress and innovation that is responsive to human needs and desires, in an increasingly complex, interconnected world. Since innovation cannot bloom in isolation, a viable cross-disciplinary dialogue between art, science and technology can illuminate us how to dream about tomorrow.

At the exhibition “Digital Dreams” while interacting with the projects, the viewer will find him / herself in the alternative spaces and hybrid worlds, and will be able to become a part of augmented reality. The territory of the project is a kind of laboratory, where artists open the way to innovations through sensual perception. Mariano Sardon turns the trajectory of a human eye into a visible movement. With «point clouds», Marnix de Nijs reproduces panoramas of urban landscapes constructed from social media streams. «Eau de Jardin» by Christa Sommerer and Laurent Mignonneau gives access to a virtual space, where illusory plants sprout out at the moment a viewer touches them. In this conventional reality, science overcomes traditional boundaries, enters the sphere of human interaction and makes innovations open to understanding. Olga Shishko, Elena Rumyantseva, Boris Debackere 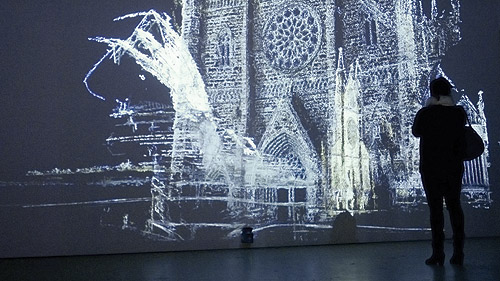 In «Exploded Views 2.0» De Nijs further investigates the representation of global urban environments and comments on the prominent role the World Wide Web has assumed in constructing our view of the world and ultimately, on what we perceive as reality. Visitor physically navigates through an audio-visual city landscape built up from ‘point clouds’. These «point clouds» are generated from online Web 2.0 photo collections like those found in Flickr. The city landscapes are constructed with an innovative 3D scanning technology that creates a surreal and dreamlike atmosphere. The content for 3D city landscape is provided by users of social media platforms. The work analyses GPS tags of all the pictures available on photo-sharing community websites and reconstructs the top 400 most photographed locations into 3D. The work represents the world according to the way it is photographically represented on the web.

Playing with the possibilities offered by the combination of movement and 3D interactive imagery, this installation purposefully places the viewer in an intensely absorptive experience. However, what is actually offered contradicts the reality of the physical and illustrative perception by mediating a juxtaposed dreamlike encounter. 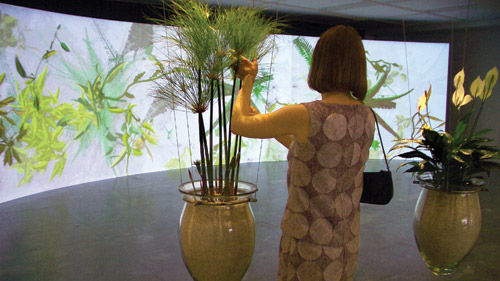 Imagine a circular room, the dado below the wall molding entirely filled with a plane of water scattered with these plants, transparent screens sometimes green, sometimes mauve. The calm, silent, still waters reflecting the scattered flowers, the colors evanescent, with delicious nuances of a dream-like delicacy.

“Eau de Jardin” is an interactive installation that transports visitors into the imaginary world of virtual water gardens, inspired by Monet’s later “Water Lilies” paintings and their panoramic setting at the Musée de l’Orangerie in Paris. The wide horizontal screens immerse the viewers mentally into a virtual picture of the water garden. When the visitors approach the amphorae, their presence is recognized by the plants, causing virtual water plants to be drawn on the large projection screens. The electrical potential differences (voltage) between the user’s body and the real plants are captured by the plants and interpreted as electrical signals that determine how the corresponding virtual 3d plants grow on the projection screen. 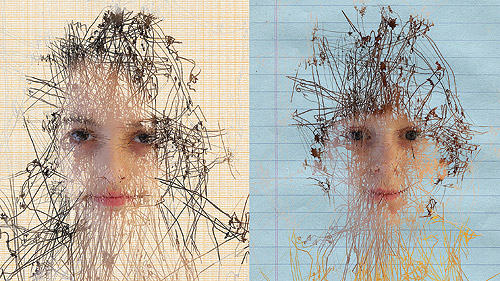 “The Wall of Gazes” is a six screens installation in which visitors can see how portrait images are built in time by the gazes of many people together.

All the paths of gazes were superimposed for each portrait and a HD video is generated reproducing all at the same time.

“The wall of Gazes” aims to engage people with those parts of the face that are really seen and those parts that remains “unseen” while attention is focused elsewhere on the portrait; it appeals to the root of knowledge of others, their face, its manner and appearance into us. 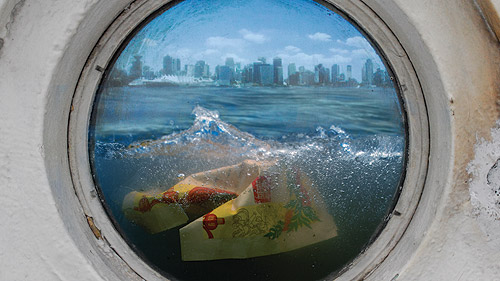 The installation consists of several monitors camouflaged as cabin windows. The video images show ocean waters, drifting materials such as abandoned and polluted objects, symbolizing detachment and alienation from mainstream cultural domains. The objects drift between sea bottom and sea level creating a sense of movement and instability. The drifting materials remind us of the remnants of different cultures and times. Sometimes they clash against the windows, and float away at other times, resonating between the viewers and the objects. Video images are activated according to the audience presence and movement via sensors. 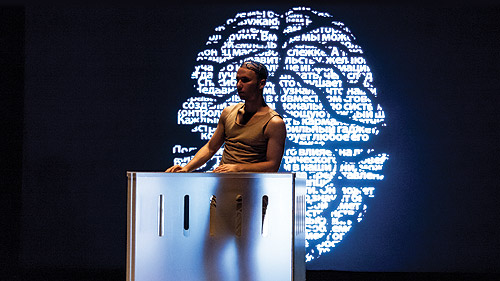 Interactive installation “The Death of Tarelkin” was created as an extension of the same-name performance premiered on 26—27th of June in Moscow and 10th of July in Saint Petersburg and became of the brightest events in theater sphere in two capitals. The project refreshes classical play by Alexandre Sukhov-Kobilin and transforms the original into mocumentary play based on sensational affair with Edward Snowden.

Installation continues to investigate illusion opportunities of human body and brain, human identity in the frame of disrupted space and time. At the same time critical issues of contemporary society lay in the basis of it, especially the issues of personal data protection and search for the balance between governmental safety and personal boarders of privacy.

The project main point is an interaction between viewer and installation. Participants are encouraged to put on his head neurosensors, that read brain signals, and try to relax, despite the intense audiovisual environment in which they find themselves. The winner is one who managed to minimize his or her brain activity and thus get closer the ball-indicator. 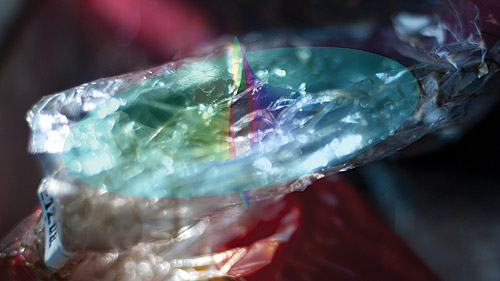 Photography appears at the moment of interaction between a photographer and the surrounding reality, its reinterpretation. Photography relates to reality but does not constitute its part, on the contrary, it grasps reality, arises from it, but, being transformed by the photographer’s gaze, it goes beyond its boundaries and overcomes reality. At this very moment an imaginary space of photography emerges.

What is an imaginary space and what is reality? In what context can we discuss them and comprehend them? For me, these questions are related to the mathematical context, and a connection between photography and mathematics reveals itself through them. In the world of math there are imaginary numbers that are not used in real life. They were created to solve mathematical tasks, and the space of these numbers was entirely designed by mathematicians. In this space it is possible to solve any equation, and the basis of the “construction” is an assumption that we are able to go beyond the boundaries of the real axis, to overcome it. In math it is possible to see the so-called imaginary numbers, but can we see the imaginary in photography?

I place photography into this infinite imaginary space and connect two layers — the visual and the mathematical — inviting the spectator to enter another reality through through the screens interaction.

Free entrance to the exhibition when registering on the website.